Am I Really Blogging On This!? 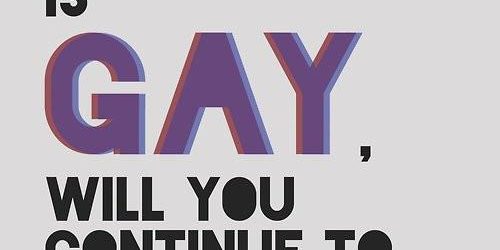 I read the following quote on Facebook and it was disturbing to me on a couple of levels. I try my best to not get involved in online debates, but I had to comment. The quote was a repost from a Facebook group about class warfare and it read, “If the fetus you save is GAY will you continue to protect its rights?”

The first and most prominent thing that disturbs me about this, is the misconception that is shows about what is perceived to be the unity of the pro-life and anti-gay agenda! I am horrified that someone would assume that my view of homosexuality would give me any pause to consider the sanctity of the life of a “gay” person.

That I would truly believe in my heart that life begins at conception but then have to pause and consider whether I would protect the life of someone gay, would be monstrous, barbaric and completely evil. If I believe a fetus is a living person, then it would be murder to destroy it regardless of race, creed, sexual orientation, or whatever . . .

It is very disconcerting to me to think that ANYONE who is pro-life would have to stop and think about how sexual orientation might change their opinion!

But my comment on the post is my second concern. I wrote, “If the fetus you kill has sexual preferences, how is it not a human being?” To bring up the sexuality of a being, even in the womb, acknowledges the reality that it is a little person. So at the bare minimum the quote takes for granted that this little gay fetus, given a chance, will become a gay child that will become a gay man. How does the gay agenda ever condone the murder of little gay fetuses?

Maybe drawing attention to the rights of those who are pushed down by society is not a great move if you are trying to promote the idea that it is acceptable to deny, even life, to a large number of the helpless.