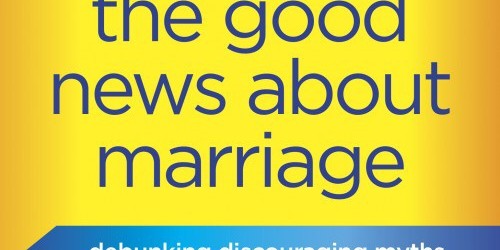 I attended a pastor’s conference in Chicago recently and one of the most beneficial take-aways, came from a breakout session that had about 20-30 in attendance. The topic was “debunking the myths about marriage and divorce” and since divorce and remarriage are something I have been specifically studying, it grabbed my attention.

I have often heard and even been known to quote the well known statistic that 50 percent of all marriage end in divorce. But in one short hour the lecturer, Shaunti Feldhahn had completely exploded that statistic as pure myth. No study or research has revealed a divorce rate even close to 50 percent in America . . . Ever.

I looked around the room as she clarified, slide after slide, that what the church has thought has been fact has actually been fiction, and everybody was as much in shock as I was. She proceeded to explode the myth that the divorce rate is the same within the church as it is in the culture at large, by citing statistics that reveal that the divorce rate is nearly 50 percent LESS among those who attend a church each week!

Shaunti is a Harvard trained social researcher who spent time meticulously researching the subject of marriage and divorce in America. She gave a free copy of her new book “The Good News About Marriage” and I have been thoroughly challenged by her research.

I would recommend “The Good News About Marriage” to anyone who works in ministry, is married, or knows someone who is . . .

I think the Christian community tends to the gullible side and is also a hotbed for passing along poorly documented “facts” without citing sources. Shaunti does an amazing job backing up her numbers with real research and real surveys.

My take-away was simply this: marriage is not in as bad a shape as we have been led to believe. Many marriages last a life-time, and most people in America will never experience the pain of personal divorce. And that is good news!