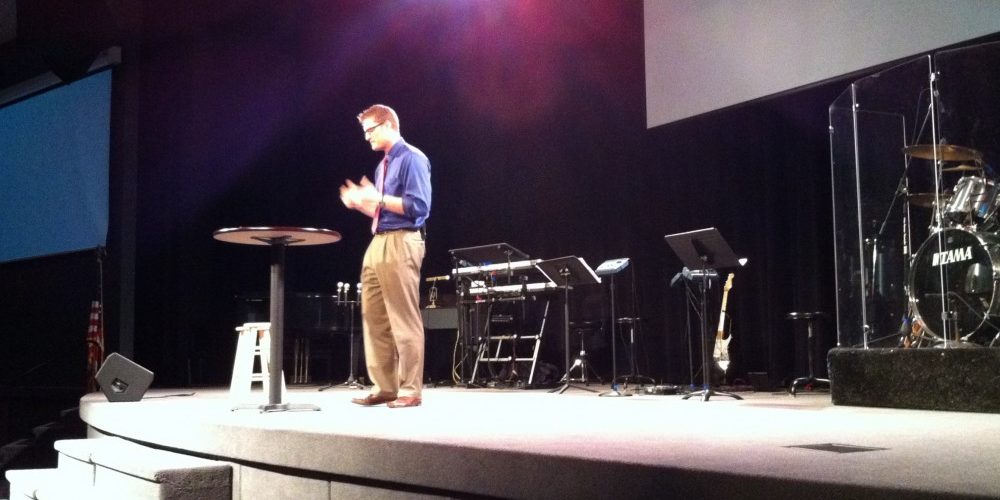 ReCAST Church turned three on the 19th of April and that is amazing to me. We have been through so much in this short span of time, but I reflect back on times when I had no idea if people would actually come to a church like this. That question has been answered by consistent growth, lives being changed, and impact in our community.

Along with remembering our past three years, ReCAST made the announcement this past Sunday that we are seeking to hire Kyle Douglass as an Associate Pastor. This is a need driven move that God has by His abundant generosity made possible. The Elders began contemplating and praying over this position back in 2011, when our growth began to ramp up. But when the possibility of hiring Kyle came up (one of our own who was well qualified for the position) we wanted to move cautiously and wisely, and we did. And that is also what made the announcement seem abrupt to some people. It makes sense to me that some have questioned the timing of the process, and have asked if it’s wise to hire from within the church. But there is a concept in the corporate world that applies here and makes some sense in this situation: It is generally better to hire from within. Let me explain.

When our current elders sat down and considered an additional vocational elder position, we knew it would probably mean an outside search. We also knew that it was a daunting undertaking, both in terms of time and possibly resources. It would have to be done, but no one was very excited about it. At one point, a few months ago, I even suggested that it was too bad Kyle was tied up with OJM, because he would be the ideal candidate. He had worked for five years as a youth pastor, had experience planting a church and as the Executive Director of an international ministry, obviously had leadership and speaking skills. Plus, I had gotten to know him as a good friend and thought we would work well together. But I could never see him leaving Orphan Justice Mission to join the pastoral team. So with the reservation to move into a full on search and Kyle on the not-so-likely wish list, we decided to wait on the Lord and continue in prayer over it.

Then somewhat ironically in January, Kyle lost his paid position due to some significant funding cuts. OJM was no longer able to keep its full-time staff in the US. Unaware that the elders were considering a second pastor or that his name had been mentioned, Kyle asked me to pray for him as he was out beating the streets for work, assuming he would need to take a corporate job to support his family.

That was when the gears began to really spin. At Kyle’s place in life, he was pursuing employment here in the Kalamazoo area which would entail him leaving full-time ministry for at least a season of his life. We spoke with Kyle to see if getting back into the church would even interest him. He said he would consider it but didn’t know if he would be able to provide for his family. After some time of prayer, we met again with Kyle to discuss in more detail doctrine, practical ministry stuff, and we reviewed his resume of previous ministry experience. We came away confident that besides just being a great guy, he has many of the skills that will help ReCAST as it continues to grow deeper in the love of Christ. We also sharpened our pencils and saw that we could be good stewards of the church’s resources and pay a reasonable salary. He still had some wrestling time with God to work through as he switched gears from a search for secular work to that of pastoral ministry, but just before I left for vacation he chose to stop the process of seeking secular employment, and throw everything into joining ReCAST’s pastoral team. So it was only a couple weeks ago that both parties were fully prepared to commit to the process and move ahead.

Now, sometimes in the realm of hiring employees, it’s seen as most fair to open up the application process to everyone and then pick from the “best” in the stack. But the reality is, many companies and organizations would rather hire from within. Insiders have demonstrated their loyalty, work ethic, values, etc. They know the business or organization already and don’t need to be “on-boarded” or trained as extensively. It just makes sense. This is how we feel about Kyle. We think God is in this, and it just makes sense.

So, we could have opened things up to receive a bunch of resumes when we had already decided that we wanted to hire Kyle. We could have made a big show about searching for the right candidate just to give the appearance that it was an open hire. And frankly, this kind of thing happens a lot, in business and in ministry. But we thought it would be dishonest to give a blanket announcement about the need and then try to drive the process toward Kyle, when we as the elders already saw the great value in hiring someone from within, who already loves this church, who is already ministering to people, who already loves our core values and mission. So as soon as it was convenient, we just came out with it. That’s how we roll around here. Authenticity is a core value that we want to apply in all relationships at ReCAST.

I have been interacting with people all week who have had pretty much this same question about the process. Should we hire from within without looking at other candidates? I am glad people are asking questions because that means that they care about ReCAST, which is in essence a small manifestation of the bride of Christ. That’s also why we have this courting period for everyone to get to know Kyle, ask him the tough questions, and see if they feel as confident as we do as elders that he’s the right guy. And above all, may the Lord’s will be done.

I hope this blog clears up some of the timing questions about how this process moved forward. And I greatly look forward to what God is going to do through ReCAST in and through the life of Kyle Douglass and his wonderful family!