Late to the Noah Party 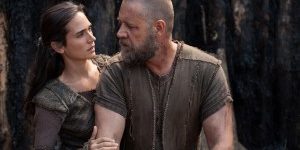 Why not write about what I think about the Noah movie, right!? I mean everybody else has already said it all, so by coming late to the party I get to read what everybody else has said and then just glean (academic for “gank”) what others have said.

But honestly, I want to say less about the movie itself and talk more about the meaning of the medium of movies. When Avatar came out I had a similar blog post. I am never going to tell people what to think about a given movie, but I would like to help people think critically. Anybody who says they can watch a movie for entertainment is missing the reason that movies exist. EVERYTHING in art and culture is communicating. According to the book of Romans, even nature is communicating. And if the rocks and the flowers are declaring to us the order, grandeur, and beauty of God, how much more do the artifacts of culture that are created by humans communicating something to us?

I would suggest to you that there is absolutely nothing that happens in a movie that did not have some significance in the mind of the director. Even the camera angle was chosen by him! The opening line of the movie, Noah, is, “In the beginning there was nothing.” I believe that anybody who has opened a Bible and browsed to the opening line might see something missing in that statement.

I watched Noah with a wary eye. I am embarrassed to say that I watched it with a much more wary eye than I watch many movies, but I am a pastor with a degree in religious education and so the content is a little closer to my heart than the Lego Movie.

Whenever I watch a movie, I try to consider what are the values put forward, what is the worldview that is encouraged and what is the God of this movie. Every movie puts forth a god, and with Noah I was hoping to find some semblance of the Biblical God!

To think that a person without faith is going to have a Biblical view of God is an unreasonable expectation, and I am quite amazed by what Darren Aronofsky (the director of Noah) got right! He had the justice of God well in hand. He had the sinful nature of man sprinkled throughout. I could see that he was conflicted regarding the sinfulness of mankind. He only had Noah, while in a crazed state, declare that sin is in all of humanity, and he had Ham declare that a woman who was killed was innocent. Regardless of the muddiness of the waters, Aronofsky’s attempt to convey the wickedness of humanity is commendable.

But, where I believe that thinking Christians must see the greatest concern is in the major gap of communication and relationship with God conveyed in this movie. The major plot line moves only in as much as Noah is left in the dark. From beginning to end, Noah’s doubt and confusion drives the plot. And in this it would be fair to reverse this and say, God’s silent absence drives the theme. How many times does a character in this film look to the sky without reply!? The screen only fills with empty clouds as characters cry out to God.

Now let me clarify that there are times in life that feel like this! And there are a few Biblical stories that may be used to convey these seasons when it feels like God is absent (when is someone going to do a life of David!?). But using Noah as this example is intentional and strikes a blow to the central message of the gospel.

In real life and history, God is lovingly connected to his creation. He strikes a one sided covenant with Noah! He communicates in details to Noah. He doesn’t merely give abstract impressions in dreams to Noah. He tells him how tall, how wide, how long to build the ark. He tells him in Genesis 6:18 that he will save Noah’s family through the ark and he pledges it with a covenant agreement! God speaks with Noah and even tells him when it is safe to exit the ark!! God does NOT leave Noah in the dark.

God is a God of relationship. He is a God of communication. And despite all that Aronofsky gets right, he fundamentally gets the heart of God wrong in this. I don’t care when Peter Jackson destroys Faramir in “Lord of the Rings” and makes him compromised rather than the regal man he was supposed to be in the books, because that is fiction. But when someone misrepresents God, I am going to have an issue.

So despite launching into a mini analysis of this movie, I have just scratched the surface of the misrepresentations in this film. I didn’t mention Methusaleh slipping Noah a “mickey” to get God to communicate with him (as if an experience with God is available through drugs). I didn’t mention the very disturbing monologue of the stone giant who explains that he is a demon imprisoned on earth because of his noble desire to help humanity (showing God to be kinda cruel) or the use of the skin of the serpent to bless people. My intention is not to tell you why Noah is a “bad movie”. It was actually very artistically put together.

What I want to encourage is the importance of considering the message of movies. Nobody has the freedom to say, “I will just keep movies as entertainment, and take my religious education from church or the Bible.” The fact of the matter is, media is seeking to communicate something to us at every turn! There is a religious agenda in all movies. There is a god that is being held up in every movie. And Christians would do well to consider who or what is being held up as ultimate in any given film.

For this reason, I believe the uber-cheesy “God is not Dead” was far more excellent than slick and star studded “Noah”. Through the murky Gouda, I was able to see the God of reconciliation, the God of joy in suffering, the God of truth, the God of relationship in everyday life, the God of sacrifice, the God of the gospel. In “Noah” I was able to see the valiant attempts of an outsider, to communicate what anybody on the inside can see as lacking. Like responding to a stranger writing a documentary on my wife, I feel justified in correcting what I see as wrong in his artistic misrepresentation of the God who has entered into a relationship with me.

If you read the whole thing. You get one punch on your endurance card.