Love the Sinner, Hate the Sin? 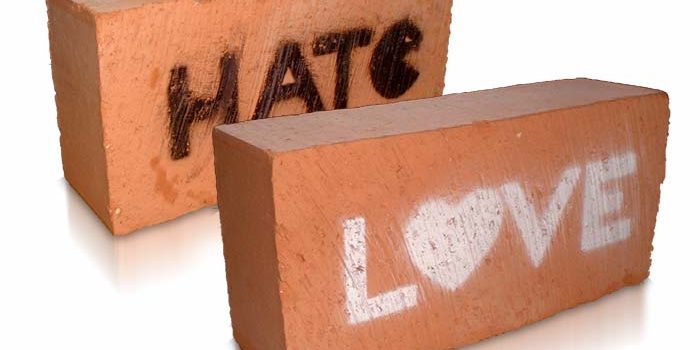 President Obama finally admitted what we already knew. He endorses homosexual marriage. Pastor Andy Stanley gave a dicey sermon illustration and didn’t condemn homosexual practices and has received heat for it. Albert Mohler, the president of Southern Seminary in Louisville at any given time has someone blogging against his very vocal and public stand against homosexual marriage. We live in a VERY confused culture. And the church is quite possibly the most divided place on the topic of gay marriage.

I grew up often hearing that God loves the sinner but hates the sin. But as I have grown to devote my life to the study of God’s Word, I am not sure that this is a completely accurate picture. In the end of the story, it isn’t sin that is cast into the lake of fire, but sinners! But there is a major kernel of truth in that God has made a way for sinners to be set free from the consequences of sin through the sacrifice of Jesus Christ. God despises sin, he punishes sinners, but there is a way to be removed from the category of sinner . . . If a person would humble him or herself and accept Jesus as King and ask Him for salvation, His Father will impart His righteousness to that person. There is a way to no longer be reckoned as a sinner.

But when this phrase, “love the sinner, hate the sin” is applied to us, I wholeheartedly agree that we should approach others this way! If for no other reason than the obvious fact that we all sin. We all have broken God’s Law. We all, except for grace, stand condemned before a righteous and holy God!

Some may question whether or not this is truly possible in human interaction. Can I love a person who practices homosexuality while at the same time suggesting that their lifestyle is sin? There is a simple answer to this . . . absolutely. I need turn no further than the mirror to find my primary example of how this works. I love myself. I feed and clothe myself. I do kind things for myself. Occasionally I buy myself a gift, and I have been known on occasion to treat myself to bacon.

But I despise my sin. I loathe my brokenness. At times my behavior is utterly abhorrent and I judge myself chiefest of sinners. I do not achieve my own moral standards, let alone God’s. I know in very clear terms what it means to love a sinner, but hate his sin.

I do not condone homosexuality and will never perform a gay wedding. I do believe that it is deviant in the same category as adultery, pornography, and gluttony (I threw that in because that is the not-so-secret sin of many evangelical fundamentalists).

But would I jump on a grenade to save the lives of a room full of homosexuals? I believe that I would (that is a dream that I have from time to time . . . But I always wake up before the grenade goes off . . . Have at it psych majors . . . HERO COMPLEX!?). Would I help a gay man or woman whose car had broken down? Yes. Would I have them over for dinner? Yes. Will there be areas of significant disagreement? Yes. Is disagreement a sin, or does it make me homophobic? Not at all.
As this world gets more and more polarized on this issue, I would like to make sure that there are public voices that fall on my side of the debate, who love the sinners!

Paul himself wrote in 1 Corinthians 6:9-11 “Or do you not know that the unrighteous will not inherit the kingdom of God? Do not be deceived: neither the sexually immoral, nor idolaters, nor adulterers, nor men who practice homosexuality, nor thieves, nor the greedy, nor drunkards, nor revilers, nor swindlers will inherit the kingdom of God. And such were some of you. But you were washed, you were sanctified, you were justified in the name of the Lord Jesus Christ and by the Spirit of our God.” As sinners saved by grace, our only legitimate response to this current issue, is love for others, because such were some of us, but God’s grace is transforming us through the truth of Jesus Christ.