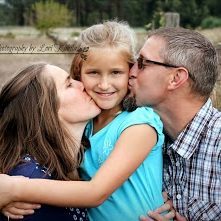 Despite what many assume, I did not name Leah after a princess from a well known science fiction movie that came out in 1978, even though her brother’s name is Luke. She is named straight up for the Biblical character introduced in Genesis 29.

And I feel like I need to clarify that we didn’t name her Leah, despite the Biblical story but because of the Biblical story. When we announced the name to some of our friends, one person actually asked a knowing and insensitive question, “But wasn’t she the UGLY one!?”

As I preach on Genesis 29 this week, the text is very clear that Leah was not as physically attractive as her sister Rachel. Linda and I knew that in the naming. And my hope for my little girl has absolutely nothing to do with physical appearance. My hope for my daughter is that she would be seen by God, be heard by God, and would be moved to praise God just like her namesake. I want my daughter, whether loved or forlorn, whether first or second, whether forgotten by men or lavished with attention, to know the love of GOD and to know that HIS attention is what matters most!

I named my daughter after the ugly one who was blessed with a relationship with God. And in the fear of God is found true beauty, true life and true hope!

The Glory Packed in the Manger
December 5, 2019