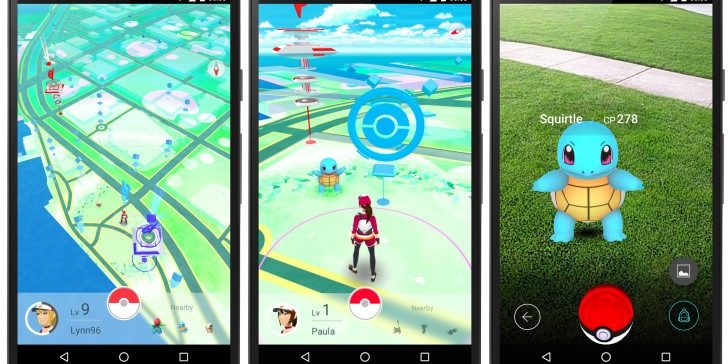 My kids have collected Pokemon cards for years. They have played the Nintendo games and we have watched the movies on Netflix. So when Pokemon GO came out, they were certainly going to be interested in this new way to play.

A week in and we have had some fun times together as a family going for walks and even exploring places we don’t regularly go. I took my son to Western Michigan University and walked around campus. What a beautiful campus this time of the year! We talked, we had fun, we smiled, we joked and we caught a few Pokemon.

But I want to share a few observations about this game from a Christian perspective. First off, let me set the grounds rules. I am not a professional in spiritism, but I have the Holy Spirit. I am not an expert in your family, but I am an expert in mine. I am not your pastor . . . Unless you come to my church. I know a few things about Pokemon having been around the games, videos, and cards for years. I even know how to play the card game . . .

1. The game is fictitious.

The entire game is the fabrication of a Japanese inventor who was enthralled with collecting bugs as a child. He then proceeded to develop the concept as an enhanced collection of these fictional creatures in a made-up world. It is quite the marketing ploy, as it feeds on people like me who like to collect things. It has been wildly successful in part because of the collectability aspect found in the games and trading cards.

2. This game is spiritually neutral.

Nothing about the game of Pokemon is asking for the allegiance of your soul. It doesn’t contain incantations, it doesn’t call upon demons, nobody is ever encouraged to worship Pokemon. Some have given the game a cursory glance and assumed it has some demonic notions. Others have shared that witch doctors who have encountered the Pokemon games have identified the various fictional creatures as spirits. Ironically, the person raised in an animistic culture, who is used to seeing a spirit in every single thing, is already geared to look at the world through the lens of a game like Pokemon and would naturally assume it is demonic.

But from my personal experience with both Scripture and this game, I find it quite unlikely that the game designer Satoshi Tajiri consulted with spiritists and necromancers in the production of this game. As a matter of fact, the newer Pokemon get more and more humorous as I imagine a board room full of game designers eager for more padding to the bottom line sitting around the board room and coming up with Tabula (the table Pokemom) and Screenachu (the screen type Pokemon). I just made those up, but many of the Pokemon are equally absurd. Chandelure has the the shape of a . . . Chandelier. Garbodor looks like a pile of . . . Garbage. I think you get the point. My kids understand the process enough that they often sit down with a sketch pad and make up their own Pokemon.

3. Pokemon GO has caused some great conversation in my household.

We have had many conversations about how much screen time is enough. How do we move around in the real world with technology always within reach? At what point does a game become an obsession? And even what is the role of entertainment in our lives? These are good conversations to be having with our children. Screens are ubiquitous and Pokemon GO is just scratching the surface of the technological interference this next generation will face. We should take these opportunities to have these conversations now.

Some people don’t like having fun, and I’m okay with that. But there are indeed some people who don’t want other people to have fun and I’m not okay with that. I have received a few emails from people at my church who have been told by others that they cannot play Pokemon GO for various spiritual reasons. And that leads to my final observation . . .

5. Think, Study, and come to your own conclusions.

I encourage each person to think about what they do, how they spend their time, and what is beneficial, and then go out and live life to the fullest, enjoying the things that God has given us through his common grace of human creativity. But recognize that the neutral things of this world can be used for good or for evil. That truth requires us to walk careful with wisdom.