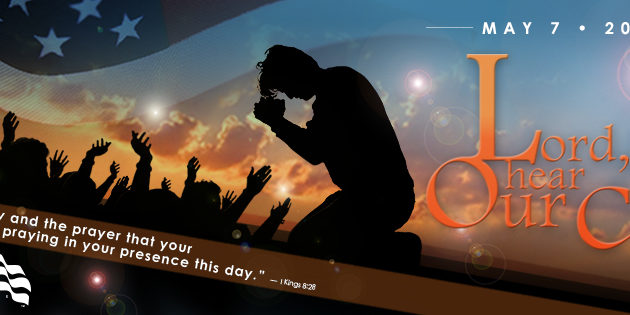 In 1952 Congress formalized into law that the first Thursday of the month of May should be set aside as a national day of prayer.  I am thankful that we have a history as a nation that includes a decade like the 1950’s where there was a significant revival after the war and people indeed turned to God as a place of hope and trust.  I am not trying to be nostalgic for a decade when I didn’t even exist.  The 1950’s certainly had its share of issues and problems, but I think that many would agree that it was a time of a more simple faith in which it was considered good and right to turn to God in prayer.  This is evidenced by the fact that prayer was even on the mind of congress at that time.

Just like anything that becomes institutionalized, The National Day of Prayer has become tradition to such a degree that its purpose could easily be swept away in formality.  This evening, I will be leading a group of people from local churches in prayer at 6:30 at the Front Street Park in Mattawan.  Over the years, this has become a quite solemn and professional event.  Various people representing segments of society will come to a microphone and offer prayers for segments of our culture and society (e.g. law enforcement, government officials, families, churches, etc.)

But the one thing that I hope is not lost in the formality and tradition is the reality of what we are doing.  We come together tonight to pray.  Such a simple thing with massive potential to shape and transform our community.  Prayer is simply verbally demonstrating our dependence upon the Almighty Creator.

It is very easy to get caught up in the politics.  If you listen to some political pundits you would think that America is going to hell in a handbasket.  If you listen to another side everything is going just peachy.  But regardless of where we find ourselves on the political spectrum, this should be a day set aside for thanking God for His blessings, confessing to God our shortcomings, and seeking God’s continued hand of blessing.

Ironically, I believe that the National Day of Prayer often becomes too political.  We have often spoken in ways that implies that America is God’s chosen nation.  But our nation is NOT God’s chosen people.  Has God blessed us significantly? Of course!  Should we seek His continued blessings?  Of course!  Do the promises in the Old Testament toward Israel apply to America?  No way!