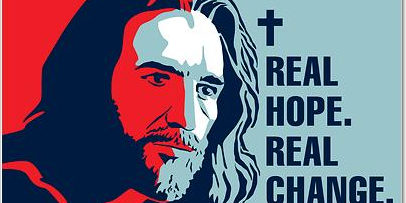 My Facebook wall is so blown up with political comments that I recommend that they start calling it “Politicbook”. Not a lot of faces, just a lot of opinions.

Pride and power corrupts. We have a real dilemma on our hands as a nation in this election. But I think that there may be some good things that are brought to forefront in this election cycle. In the past we have been able to pretend that our favorite candidates were perfect. But this time around, we are smacked in the face with the reality that both major party candidates have significant moral issues.

This blog could just be another step down into discouragement, unless we allow the reality of our falleness to drive us to consider the solution. And the solution is that there is indeed one leader who is without sin. There is one leader with the moral character to lead his people to righteousness. As a matter of fact he doesn’t merely model righteousness for us, but he has purchased it for his people.

My suggestion isn’t that you write in “Jesus” on the ticket on November 9th, but my suggestion is that you cast a vote for him with your life. Honor Him as the king, ask for his forgiveness and grace over your life. And then in the power of His Spirit go out and live out his life in your work, in your neighborhood, in your family, and in your political conversations!

I would love to hear a little more Jesus and a whole lot less rhetoric from Christians right now. Vote for the sinner you think will damage or culture the least, but make sure your trust is placed firmly on the shoulders of the one who can truly make his people great . . . And his name is not “Trump”!